skip to main | skip to sidebar

I recently had a sabatical of a month off from work, during part of that time (traditional vacation aside) I treated my current game programming project like a job and got a tremendous amount of work done. I figure I am about 2 weeks away from asking some friends to give the first dungeon level or two a test.

Here are a couple screen shots. There is still plenty of cleanup work to be done, as some of the icon positions overlap other items too much. I am also using temporary artwork for the character portraits and the shopkeeper (from Final Fantasy and Ragnarok Online respectively) while I work to draw my own. So the good art is someone elses sadly and will not be part of the actual game. 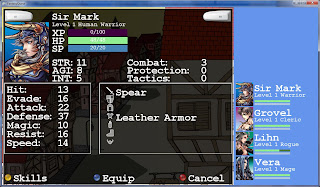 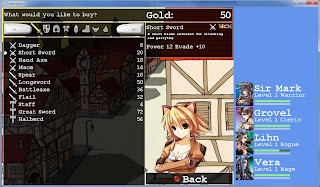 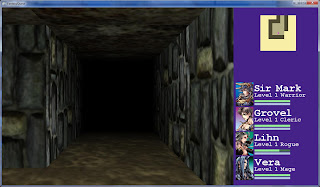 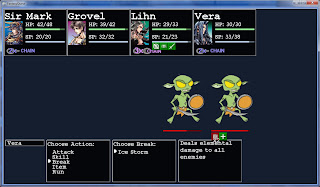 Posted by Stacktrace at 10:56 PM No comments:

A post inspired by the wonderful The Dungeon Alphabet book, I present a selection of magical mirrors to inspire both fear and wonder.

Traits (These effects are always on)

1- Is connected to a similar mirror elsewhere, and the scene shown is that of the other mirror. (50% of such mirrors also transmit sound, allowing complete communication)
2- The answer to asked questions are shown visually in the reflection...(50% of such mirrors always give the wrong answer)
3- Damage to mirror reflected onto those reflected in it
4- Gives off a pale glow
5- Time delayed (shown reflection is from a couple hours/days/years in the past)
6- The reflection of any writing is translated and shown in a single language
7- Items can be placed in mirror as sort of storage, which show in reflection
8- Can swap items in mirror by trading with your reflection, cursed items become uncursed, uncursed become cursed
9- Casts reverse/opposite version of scroll shown to it, or spell cast into it
10- Viewer becomes transfixed and cannot look away
11- Regenerates wounds of viewer at a rate of 1hp per minute of viewing
12- Detects magic by showing a glow around any magical object in the reflection
13- Invisible objects and creatures are shown in the reflection
14- Shows the true identity of disguised creatures in their reflection, and the reflection of those that lie take on a visible aura.
15- Shows self a few moments into the future based on current intention (see what the result of drinking a particular potion would be)
16- Reflects a person's idealized self
17- Gives viewer extra confidence
18- Energy drain as per Wight
19- Ages Viewer at rate of 1 year per minute spent viewing
20- Thoughts of viewer are visible in the reflection

1- Viewer's values become opposite of current. Changes a character's alignment to its opposite.
2- A soul is trapped in the mirror, upon activation, the soul of the viewer is swapped with the trapped soul, and the previous viewer is now trapped with the other now in control of their body.
3- The mirror can shrink down to pocket size for transportation. Very useful if the mirror contains additional properties.
4- Allows the user to scry a distant location in the mirror that is spoken.
5- Shows the current view of the living person who has a particular trait (most powerful, fairest, etc.)
6- Transport to shown location by stepping through
7- Can change viewers appearance to that of another individual for a short time
8- Erases living creatures reflected in mirror from existence
9- Allows entities in some other plane to emerge into this one
10- Shows reflection of area on opposite side of wall mirror is hung upon
11- User Shrinks or Grows (reversed if used again)
12- Grants a single wish (50% of such mirrors always grant the opposite of what is wished for)
13- Turns day to night and night to day
14- Creates mirror image duplicates of viewer as per spell
15- Duplicate of self emerges from mirror, opposite in every way
16- Can hold a conversation with your subconscious self (or other entity taking your form), as represented by your reflection
17- Creates a clone of viewer at that point in time, which is activated upon the death of the original, only one clone per viewer, which is updated with skills, knowledge, and equipment each time viewed, limited charges
18- Creates temporary/mindless clones of self to use on menial tasks
19- Changes viewers gender
20- Casts Quest spell onto viewer

Posted by Stacktrace at 8:39 PM No comments:

Just recently I was pointed Good old Games and picked up the Might and Magic collection. I was always a fan of the Wizardry and Bards Tale games, and the newer Dark Spire and Etrian Odyssey for the Nintendo DS, but I have never played any of the Might and Magic series. I was very surprised to see how well these held up, as I am having a great deal of fun working through the 4th in the series (the first 2 ended up being much too dated).

So though I have recently given up the idea of writing my own rpg rules, it seems I still have some unnatural need to create, so inspired by this, I have been writing my own Maze based computer RPG game. So, from writing just a set of rules to not only the rules, but graphics, programming, sound effects, story, etc...

Thankfully, using XNA it has been quite easy to put together and the game has been coming along nicely after just a couple weeks of work. Already one can move through the maze and fight goblins. The graphics however remain on my poorly equipped shoulders for the moment, but I wanted to show off a very early screen shot of the stalwart party in combat. The combat interface is due for an overhaul as the system itself has solidified. 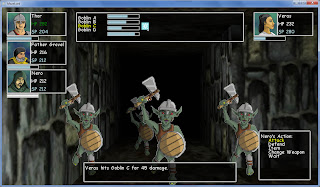 Now that the holidays have passed, and I find myself returning from the bustle of family life and back to spending more time gaming. Or at least that is the hope. I have had an ongoing obsession of trying to write my own set of rules that "fix" DnD, in fact sharing this process was one of the original ideas behind this blog. Then I read about an incredible game using nothing but the original ODnD ruleset as it's base, and I think that I have been focusing my creative energies in the wrong place.

I think I would be best served in writing and designing an interesting area full of adventure rather than fiddle with rules. Of course, I cannot help adding a few houserules of my own, but that will have to be the limit of it. Currently looking like either Castle's and Crusades or Labyrinth Lord will serve as the basis for my rules. Both have aspects I love, perhaps some crazy mashup of the two. I have the latest CnC Players Handbook on its way, should arrive tomorrow, and Labyrinth Lord just released the Advanced Companion for that game, so there is a lot there to eat up.
Posted by Stacktrace at 7:16 PM No comments:

The latest edition of DnD (4th) assigns party roles to each class (Defender, Striker, Leader, Controller). One claim is that this system has always been in place, and it is now just being codified and helps new players build efficient party's that work well together. While I believe each class has always held unique roles, I do not feel the roles they (the 4th edition designers) chose are truly representative of the history of the game.

For one, the class roles in 4th edition are all combat based. A character is more than what they can do in combat. I feel class roles are better defined at the Adventure level.

The above is more hindsight of idealized roles. In reality, I do not recall building party's based on class roles, but they tended to be balanced because of everyone's need to feel unique and stand out. I did notice that certain classes attracted certain people or moods. A class was less a role, and more a state of mind, a different flavor to playing the game. A player should choose a class because of it's play style and skill, not because the group "needs" a particular class it is lacking. To this end, I offer up a revised set of "roles" for the 4 basic classes:


I prefer basing class roles on play styles rather than justifying the existence of the class because it brings something unique the party needs to survive. Any party composition should be playable, especially when you have a small group (less than the number of roles). A player should play a class they enjoy and that inspires them, rather than feel constrained by what is practical or necessary.
Posted by Stacktrace at 4:02 PM No comments:

The RPG that has garnered most of my interest right now is Hackmaster Basic by the folks at Kenzer Co. The combat system in particular has really grabbed my attention. Rolemaster has always held a place in my heart as one of the best combat systems around, but I have had some issues with it:

So along comes the new Hackmaster basic, and I am seeing in it the unrealized hopes of the fun and detail of Rolemaster combat without my perceived drawbacks. There is a lot to like here:

Looking forward to running my next session.
Posted by Stacktrace at 10:34 PM No comments:

I have considered starting a blog for quite a while. As I find myself spending more and more time reading roleplaying blogs, especially of the old school Dungeons and Dragons variety, the more I seem to have to say.

Does anyone really care what this humble scribe has to say, that remains to be seen. I plan to use this space as a collection of my own thoughts and creations. I am a collector of rpg rules, only a fraction of those that line my bookcase have ever been played, but I do not regret their purchase. I enjoy reading rules of all sorts, and I am cursed with the never ending desire to mix and match what I feel is the best of all rules, into an unstoppable rules masterpiece. I have yet to succeed in this endeavor, and I expect many future posts to come from this pursuit.

I hope to hear from like minded people, and see what I can learn from sharing ideas.
Posted by Stacktrace at 10:03 PM No comments: